Henry David Thoreau knew what he was talking about when advising his readers to “Simplify. Simplify. Simplify.” When Google set out to develop a new OS, they introduced the next level of simplified workplace cloud collaboration with Chrome.

Over the past months, we’ve taken a high-level look at Chrome OS and started breaking down its four pillars. We’ve examined its speed. We’ve made a case for its security. Now, let’s discuss Chrome’s third pillar — simplicity.

Cloud computing shouldn’t be stressful. It’s supposed to heal pain, not cause it. Google Cloud delivers user-focused enterprise productivity along with scaled, central management for organizations through its Google Chrome Enterprise offering.

Chrome is Simple to Use

This means both your end users and IT administrators enjoy the OS platform’s simplicity. They benefit from greater control that integrates with the pillars of speed and simplicity.

When logged into a Chrome device, end users work from an intuitive interface that takes practically no ramp-up time. They have easy access to Google Workspace (formerly G Suite), Google Cloud’s workplace productivity tools, and all the other terrific cloud collaboration solutions businesses are using today.

Users also don’t need to worry about system updates or antivirus or malware software being out of date. Automatic updates and built-in virus control keep users working rather than worrying about device management and maintenance. You automatically get secure cloud computing.

It’s a stress-free experience, not just for the users, but to a large extent, also the IT department. This automation reduces user dependency on the IT team. It ensures that each device is booting quickly into a known good state.

Chrome also integrates easily with the existing infrastructure. It has built-in VPN support and offers other options via Chrome extensions for vendors, such as Cisco, AnyConnect and F5, to name a few. This gives users easy access to private networks.

Virtual desktop solutions from such companies as Citrix or VMWare provide access to legacy apps, data and desktops. The system is flexible and plays nicely with others. It’s almost too easy. And that’s a good thing.

I’m a Chrome user and swear by my Chromebook. It’s really true that a move to Chrome and its cloud connected devices can transform the way your entire organization works. You’ll enjoy more productivity and less stress.

And that means you’ll have happier IT and end users who will work faster, smarter and maybe even more collaboratively than they have in the past. 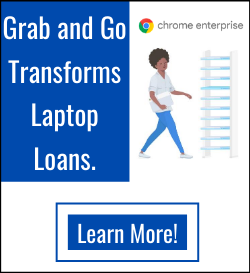 Benefits of Moving from Exchange to Google Workspace