When it comes to cloud-based productivity tools in the workplace, you generally have two choices: Google Workspace (formerly G Suite) and Microsoft 365. Chances are you’ve used at least one of them, if not both, but which is best for your organization?

Both products have their merits, but ultimately, you’ll have to choose one. How do you know which is the right option?

Let’s look at Google Workspace vs. Microsoft 365 and see what each could do for your organization when it comes to workplace cloud collaboration.

As increasingly more of the work world turns to a “work-from-anywhere” approach with employees spending their days in home offices and other remote locations, it’s essential organizations have a way to easily connect and collaborate across teams.

The cloud provides the easiest way to accomplish this by giving workers the ability to log in to their email, documents and spreadsheets and more with a single sign-on no matter where they work. As long as they have an internet connection, that is.

As mentioned above, both Microsoft 365 and Google Workspace deliver cloud-based collaboration and productivity solutions that fill this need, so before you can compare, you have to assess what each one offers:

So what does this all mean? On paper both look pretty similar. In practice they are quite different, right?

Not exactly. Remember, Google Workspace was designed for the cloud. Microsoft 365 is based on the company’s legacy solution Microsoft Office.

Google Workspace includes Gmail, the most used and best free email service in the world, as well as the familiar Google Calendar.

Gmail has been a favorite with the general public since being introduced in 2004. It’s familiar, particularly with millennial and Gen Y workers, who have been using it personally for years.

In addition to its popularity, Gmail is available in the enterprise space and has been since 2006 when Google rolled out the original Google Workspace, “Google Apps.” Gmail enables you to create business email accounts using your own domain name and offers a variety of familiar apps.

With Microsoft 365’s Outlook, you can also create email addresses with your own domain name. However, Microsoft’s apps are overwhelming in numbers and are generally not as highly regarded as Google’s. Gmail is known for its simplicity, ease of use and large storage capacity.

Speaking of storage, both of these workplace cloud collaboration solutions offer cloud drives, but each have its own features.

In general, a cloud-based storage service ties into the apps you use to create and edit documents and gives designated users access to share and collaborate together from one storage location in real time.

These cloud drives sync across devices, allowing users to access files from anywhere on any device. They aren’t tied to a traditional hard drive on a single computer, a plus for today’s growing remote-work way of life.

Google Drive gives users the scale and power of the Google environment at a business level, backed by customized security. A basic Google Workspace plan offers 30GB of storage per user across Drive, Gmail and photos. The other plans give users unlimited cloud storage. Here’s a breakdown of Google Workspace’s simple and straightforward pricing plans that encompass all Google Workspace apps, including business email through Gmail:

The pricing is also a bit confusing as it offers different per-user pricing for annual vs. month-to-month commitments. Each level also offers different services and features, but all provide only 1TB of OneDrive cloud storage per person. Take a look:

Organizations that want only Microsoft 365 apps and cloud storage can also opt for a plan that doesn’t include email and calendaring. This “Microsoft 365 Apps” option costs $8.25/user per month annually or $10/user on a monthly basis.

Although Google and Microsoft both offer competitive pricing, Google Workspace’s pricing structure is simpler and easier to understand. Plus, Google Workspace comes with unlimited cloud storage, whereas Microsoft 365 plans do not.

If you’ve heard the expression “form follows function,” you understand that Google Cloud’s approach to developing its workplace collaboration apps marches in lockstep with that age-old design edict.

When designing , Google focused on a basic and intuitive interface that simplified communication, collaboration and sharing. The package allows multiple users to work on a file at the same time and gives them the ability to leave comments, notes and suggestions, to review and accept edits — and to revisit previous versions in Google Docs, Sheets and Slides.

You don’t need to make copies of the doc, which cuts down on version confusion common with Microsoft products. Rather than making the changes and having to send an email to a colleague asking them to review what you just did or send them a copy of the doc, they will get an automatic notification.

Additionally, other apps like Google Sheets and Google Calendar make project management easy and informative. Timelines, checklists and other files can be shared with teams to keep everyone aligned.

And what about features like built-in AutoSave? You don’t have to go into settings to turn on this feature. It’s standard with Google Workspace and eliminates all of those all-too familiar issues of losing unsaved work when your computer crashes or you accidentally log out of a file.

When you create a new Google Doc, it’s automatically saved in your drive. You don’t have to name it first, and it constantly auto-saves your work, so your files are always up to date.

While Microsoft Word offers users a familiar, longstanding interface, it can be over-complicated and not always intuitive. Many of the Microsoft 365 apps’ most advanced features aren’t used and are unnecessary in most ordinary work situations.

How many of the menus in Word, Excel and PowerPoint have you never opened, or if you have, how many of the features in each menu have you never used? Younger users have grown up with the same Google apps on the consumer side and find Microsoft complicated and have too feature-laden for day-to-day office needs.

Again, both of these workplace cloud productivity suites offer ways to collaborate in real time with your workforce through video conferencing, chats and more from desktop and mobile apps. Each has different features and platforms, however.

Google Workspace’s Google Meet is the renamed version of the former Google Hangouts Meet. Focused on face-to-face interaction and collaboration, this tool integrates effortlessly with the other Google Workspace apps. You can set up meetings and share files using any of your Google Workspace tools, including Gmail and Google Calendar.

Meet can support up to 250 participants in a single video conference and also deliver live streaming to up to 100,000 viewers.

Google Chat is Google’s answer to instant messaging and features the option for direct messages and group chats. It can be used as a standalone app or integrated into the Gmail layout.

In today’s work-from-anywhere environment, missing a work call doesn’t need to happen. Google Voice allows your teams to make and receive calls using a work number on any device from anywhere in the world.

So what does Microsoft 365 offer in the communications arena? The platform has rolled its communications tools and many collaborative features into a single umbrella: Teams. This feature includes chat, threaded conversations, video meetings and conferences and voice calls.

As stated earlier, most people are familiar to one degree or another with Google Workspace and Microsoft 365. But despite the familiarity, ease of use is still key during the decision-making process.

Within many organizations, younger employees are demanding to have the ability to use Google Workspace tools at the office because they are more familiar than the corresponding Microsoft Apps.

From a functionality standpoint,Google Workspace gets the job done with a simple, streamlined and straightforward interface that’s familiar to so many users. Users can focus on getting the work done rather than waste time trying to figure out how to get the work done.

Where Microsoft may offer more advanced features, the Google “view” is generally clean and easier to navigate. Plus, a lot of the bells and whistles that come with Microsoft 365 rarely get used.

Whether you’re a small business or a large enterprise, it has never been easier to switch your workplace cloud collaboration strategy to Google Workspace from Microsoft 365 for enhanced workplace collaboration, better pricing and the endless integrations.

Are you ready to make the change? 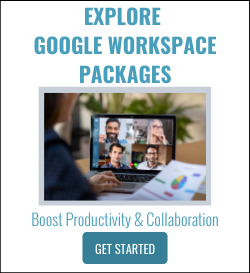 Andy started his foray into technology at the ripe age of five tearing apart the home computer to figure out how it all worked. The next natural step was trekking down the library to borrow books on programming. (There was no World Wide Web back then). After all the schooling was done, that led to a long 10 years of working in IT in every job there was: helpdesk, datacenter admin, backup specialist, disaster recovery tech and finally... Google Administrator. I was with the first enterprise to switch to Google back in 2009. I moved around between a few organizations, all using Google. Helping them get "more for their money" and transforming the way they used the platform. This ultimately led me to Onix. I believed in Google so much, this was my opportunity to help organizations understand just how beneficial it could be.

Is Your Team Ready for the New Now?

ready to discuss Google Workspace For your organization?

We've got the Google Workspace expertise to help you make the move. Let's talk about your current platform and see what's right for your organization.