AWS 101: What is Amazon WorkSpaces?

Not all workers have access to company laptops in today’s growing work-from-anywhere world. Many institutions still use desktop computers. So what does that mean when an entire workforce needs to stay home and work at the same time?

It can place a heavy burden on IT as they scramble for a solution when a VPN fails or might not be available. Amazon WorkSpaces is one such answer to this dilemma. Now that we’ve done a high-level view of AWS 101 and also talked about the Amazon EC2 service, we’ll dive into a closer look at this virtual desktop offering from AWS.

What is Amazon WorkSpaces?

This cloud-based, virtual desktop service can replace a traditional desktop and “plays nice” with every device and platform in the process. It’s managed and secure and gives organizations an alternative when building closures are required, natural disasters occur or organizations need or choose to eliminate traditional client VPN solutions.

Amazon WorkSpaces offers immense flexibility. It can be accessed via devices running Windows, Mac OS, Linux, ChromeOS, Android, FireOS, Apple IOS, and web browsers. You also can use thin-clients (essentially a terminal with a minimal embedded operating system and a network interface) to access WorkSpaces.

This solution allows for a customized bundle for each user desktop that includes an operating system, compute resources, storage space and software applications that permits users to perform day-to-day tasks just as if they were using a traditional desktop.

What are the Advantages of Amazon WorkSpaces?

Its flexibility allows organizations to minimize hardware depreciation because they don’t have to buy updated hardware every three to five years, which is the customary practice. Instead, organizations can simply release a revised Amazon WorkSpace bundle that takes advantage of a new OS (Windows or Linux) with increased technical specs.

It reduces the hassles and costs related to managing inventory, OS versions and patches. In turn, this means you can simplify your desktop delivery strategy. Users get a fast, responsive desktop of their choice that they can access anywhere, anytime, from any supported device. They aren’t tied to their desk and can work from wherever.

How Are Organizations Using AWS WorkSpaces?

With the current, sudden push to move workers to a remote-first working environment, AWS WorkSpaces is a highly viable solution. In fact, we recently worked with a multinational financial services client that has workers in both the United States, Italy and the United Kingdom to deploy Amazon WorkSpaces.

Our customer didn’t have a VPN solution in place but needed its workers to work from home. They reached out to Onix, and our team advised them of the steps needed to make 100 WorkSpaces readily and quickly available with a secure connection that was able to replace the need for a client VPN deployment. While this isn’t the primary purpose of WorkSpaces, it added extra value to the client’s solution.

In addition, this approach allowed existing users within the domain to be quickly assigned to an individual AWS Workspace using the same credentials they had been using to access their physical work computers in the office each day.

The Onix team also created a WorkSpaces image to provide the client organization’s employees with a uniform desktop and a set of pre-installed applications. This image was turned into a WorkSpaces bundle and assigned to specified users.

On the end-user side, once they logged in, the desktop image looked like a standard Windows 10 desktop to users, no matter what device they were using to access their individual WorksSpace. This gave them a familiar interface and a seamless computing experience.

How Would I Be Billed for Amazon WorkSpaces?

AWS WorkSpaces offers two billing models, one for those who need around-the-clock access and those who have workers on a set schedule.

On 24/7 billing makes sense for organizations where they constantly run processes, batch files and do data analysis, for example. These organizations will pay an always-on rate.

For offices where workers have a set 9-to-5 schedule, however, there’s no need for 24/7 access to WorkSpaces. They can instead pay on an hourly billing model that allows them to set a timer and essentially hibernate the system for however long they need. They aren’t paying for anything when the system is asleep. When users log in, the system wakes up and comes back up within minutes, usually with applications in the same state as when they were left.

In a time where remote-first work suddenly is becoming the norm rather than the exception, connecting employees safely, securely and with relative ease is of the utmost importance. For organizations with on-prem environments, that can be a tricky thing if they want to move quickly from the office to a work-from-anywhere model.

Amazon WorkSpaces allows workers, such as those of our financial services client, to get back to work safely, remotely and as quickly as possible.

We want to be sure you understand all that Amazon Web Services has to offer, so be sure to check out other blogs in our AWS 101 series.

AWS 101: How Does Amazon EC2 Work in Cloud Computing?

AWS 101: Why You Should Be Deploying AWS Lambda to Run Code

To learn more about Amazon WorkSpaces and get information on a current pricing promo from AWS, click below, complete the short form and we'll be in touch. 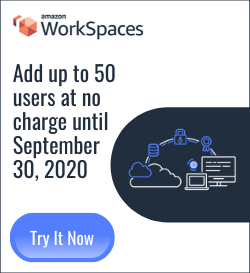 Gerald (Jerry) Van Guilder specializes in GCP and AWS architecture, deployments/implementations and migrations. One of the many things that he enjoys is enabling clients to feel empowered not only by technologies but also in the skill/knowledge transfer that transpires during the course of an engagement. Jerry lives (and works) in Syracuse, New York, with his wife and two pups.