Ten years ago, Chromebooks arrived and the effects on the consumer and business spaces have been enormous. But it isn’t just the past that’s interesting—the Chromebook and Chrome OS are also poised to carry computing into an exciting future.

From Sideshow to Starring Role

Its launch saw Chrome OS viewed as a curiosity by many. Others gave it the cold shoulder, simply writing the platform off as not viable for business consideration. Modest device costs relegated Chromebook to the educational space in some industry watchers’ minds. The phrase “low frills” was floated.

But that was then. Now? Let’s just say things have changed as we celebrate the 10th birthday of Chromebook and Chrome OS.

What began life as an oddity has evolved into the most full-featured platform on the market today. Chrome OS seamlessly runs web-based applications along with those designed for Android, Windows and Linux. It’s also the most secure platform available and one that its competitors are subtly trying to emulate. If imitation is the sincerest form of flattery, then Chrome OS’s rivals are complimentary indeed. And it isn’t just other technology powerhouses that recognize Chrome OS’s capabilities. In the decade since its launch, Chrome OS has become the second most popular desktop operating system behind Windows, surpassing even macOS along the way.

What Makes Google Chrome Enterprise and its Supporting Products Such a Hit?

A blend of factors came together to create Chrome Enterprise and to build its reputation as a serious business platform.

Chrome Devices are Easy to Manage

Chrome devices have proven far easier for businesses to manage than other systems. It typically takes just one administrator or endpoint manager to oversee a fleet of 5,000 devices, for example, compared to the handful of admins that must be dedicated to a similar number of Windows machines. This means organizations can turn their IT resources loose on more strategic initiatives that provide greater value to the business, without sacrificing the user experience or productivity along the way.

Chrome Enterprise is Serious About Security

Part of Chrome Enterprise’s ease of administration is its built-in security model. Rather than saddling enterprises with numerous add-ons to manage in addition to the device itself—antivirus, antimalware, security clients, etc.—it’s all built into the Chrome OS platform. Weekly updates, which have long been viewed as a recurring headache for admins and users alike, don’t plague Chrome OS. Instead, Google automatically pushes out any necessary updates every six weeks, a cadence that is expected to change to every four weeks later this year, though admins retain control over how and when devices complete the install. Important security updates are pushed out as soon as they’re available between version updates. In all, much of the heavy lifting required by regular endpoint management is eliminated by Chrome OS.

Chrome OS is Easy to Use

From the end users’ perspective, Chrome OS offers big advantages in simplicity. The experience is easy and intuitive. Everything is accomplished in the web browser, there are no applications to update or install. Users log in, begin a browser session and go to their web service of choice. Obviously, a hefty percentage of web applications today are SaaS but Chrome OS is a full-featured platform that can deliver an excellent user experience with Windows, Android and Linux applications, too.

If there’s one thing we've all learned over the past decade, it’s that updates can be a real time sink. Chrome OS takes that often annoying task and streamlines it. Users no longer need to plan their morning around how long their device will be occupied with the latest software rollouts. Most Chromebooks take about eight seconds from restart to the time you're logged back in, and that includes any OS updates that are part of the cycle.

Moving from one disparate system to the next is another cumbersome aspect of some platforms. Users logging in to Chrome OS can easily switch to Gmail, Calendar or Google Drive without fiddling around with additional logins. All of Google’s cloud services leverage the same identity, allowing immediate and seamless access to the entire suite of applications and services the organization subscribes to. Many third-party applications also enable the use of a Google login to provide access. Chrome OS can also work in single sign-on and Active Directory environments, providing the same experience for Microsoft Office 365 users.

Cloud is where workloads, storage and compute power are headed, if they aren’t there already. The pandemic put a spotlight on the limitations of traditional architectures, revealing the value and benefits of the cloud’s easy scalability and reliability. When workers transitioned to work-from-home during COVID-19’s early days, many companies tried to leverage VPNs and VDI infrastructures. Success was fleeting for most, since these services were originally built out to support only a small segment of the user population and they were quickly overwhelmed. As a cloud-first platform, Google Chrome Enterprise was a logical answer for those businesses that needed a better way to get their workers up and running at scale.

Chrome Enterprise is Ready for the Future

Collaboration, security, user experience—they’re all top-of-mind in today’s fast-paced business environment. Organizations want to maximize team productivity, IT needs to safeguard the company’s data assets and workers expect technology to enable them at every step of the way. Chrome OS meets those challenges with its highly intuitive interface that has been fine-tuned and put through its paces through more than 2.5 billion downloads. Businesses large and small look to Chrome Enterprise to deliver tools that help employees work together effortlessly and IT teams rely on Chrome Enterprise to maintain a highly secure environment. Across its decade-long history, Google remained committed to the continuous development of new and better features within Chrome Enterprise. Businesses using Chrome Enterprise are positioned to benefit from those 10 years of innovation to succeed in a future that’s sure to be as dynamic as it is competitive.

Where business needs are headed, where cloud computing is going, what endpoints will look like tomorrow: That’s Google Chrome Enterprise. 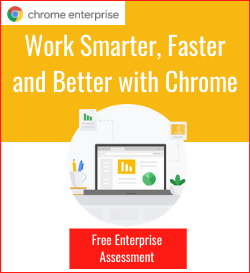 9 Reasons Your Business Should Be Using a Cloud-Based Intranet

4 Reasons to Choose Google Voice for Your Business

Our Google Chrome assessment gives you an in-depth look at how Chrome will fit into your organization and help you deploy it confidently for next-level productivity, collaboration and connectivity.